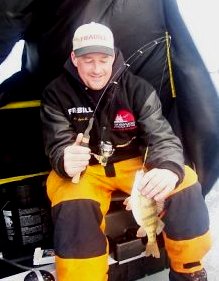 Born in Oshkosh, Wisconsin, but now residing in Berlin Wisconsin, Captain Larry has been fishing for as long as he can remember. He started guiding 18 years ago and now does this on a full-time basis, starting his own business "Larry Smith Outdoors, LLC". He works hard to share his knowledge of the outdoors with his clients everyday and as a presenter at many seminars throughout the year.

His favorite species is Walleyes (although he does not limit himself to that), and he loves to jig. He has been regularly featured in the Badger Sportsman magazine and appeared on FSN for the Lake Erie Tournament, where he finished second by only 10 ounces! He is a very successful tournament angler, fishing in both the FLW circuit and the PWT circuits.

Larry appears regularly as a co-host with John Gillespie on "Wisconsin Waters and Woods".
He has 4 children Sawyer (16); Jacob (13) Isaac (9) and Lucy (5) and enjoys watching them grow and enjoy the outdoors as much as he does.


Check out the Links to the right for a list of Larry's sponsors.