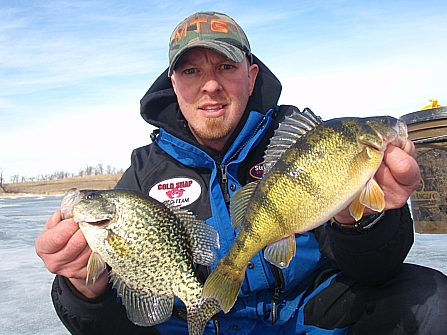 Craig Oyler from Rapid City, SD:  On or off the ice, Craig strives to be the best multi-species angler he can be. Born in Rapid City, SD, Craig has been fishing for over 30 years. He was one of the early adopters of the tools of the modern ice fishing age, and is a big proponent of selective harvest/catch and release.
Craig enjoys sharing his love of the outdoors, and ice fishing by volunteering his spare time at the Rapid City Club for Boys. Craig maintains a small warehouse of ice fishing gear to effectively take as many as 10 underprivileged boys fishing.

Appeared on FSN's We Love It! Outdoors