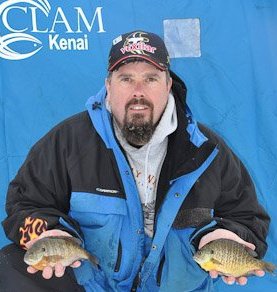 Tod Todd is a veteran ice fisher who started fishing at a young age with his Dad and older brother Scott, primarily fishing the Fox Chain, and southern Wisconsin waters. He also has started his kids at the age of three teaching them to land big gills thru the ice.

Tod fished the old Trap Attacks and now fishes the NAIFC finishing as high as 5th place in the 2008 championship in Rhinelander Wisconsin.  Some ice seasons he may hold up to 5 fishing licenses in as many different states.  Tod starts fishing the last weekend in November until putting away his gear the last weekend in March after the Genz Invitational in Orr, Minnesota.

Tod spends over 60 days a season ice fishing and teaching other the great sport.  He has been spotlighted on Illinois Outdoors TV, and many newspapers around the tri-state area.